Follow my blog with Bloglovin – Just wanting to formally claim my blog! 🙂

Time for Sephora’s Spring sale! While it’s not as much of a discount as the Fall sale, it’s still worth picking up some things. Here’s my wish list.

Drybar Prep Rally Prime & Prep Detangler – I tried a sample and really liked how it helped me get a second day out of my hair. The smell is not great but it dissipates pretty quickly.

Sunday Riley Power Couple Duo: Total Transformation Kit – I really liked the small sample I tried of Good Genes and I’m really interested in coupling it with the Luna Sleeping Night Oil. Is this stuff overpriced? Yes. But I started seeing results and really want to give it a longer trial period.

Shiseido Facial Cotton – These are such a splurge but I just can’t quit them. They are soooooo soft but yet don’t fall apart. Everything else feels like sandpaper compared. These are definitely best in slot for me.

Urban Decay Finger Brush – If you’ve read my past posts, I’m a huge fan of UD’s brushes. I need a short, dense, not overly soft brush and I’m hoping this one fits the bill. Specifically I hope it makes Tarte’s Make Believe in Yourself Palette usable because it is really finicky.

Sephora Collection Crystal Nail File – I LOVE this file and I want to stock up on a few extras! It’s a best in slot for sure. They aren’t rough, they don’t make your nails ragged and I’ve even smoothed down a callous on my foot with one. These are especially fab if you have acrylic nails because they let you buff out the growth without tearing up your skin. Even my husband thinks it’s magic.

Sephora Collection The Pointer Blending Sponges – Hoping these might help me get a better application for my under eye concealer. So far my beauty blender isn’t cutting it.

Tarte No Shower Happy Hour – I’m a sucker for a kit. My sister has raved about the Hair Goals Dry Shampoo but I want to trial it before committing to the large size since I’m sensitive to the overpowering fragrances most dry shampoos have. The rest of the goodies in the kit sound fun too!

I also want to pick up a liquid foundation to add into my rotation but I haven’t decided which one to buy. My skin has been crazy dry and my usual go-to powder foundations are just accentuating the dryness.

What are your must-haves for the sale?

Urban Decay’s Optical Blurring Brush has been one of my best in slot loves for ages. I love it so much that I have three. I use one for my pressed powder foundation, one for liquid foundation or foundation primer, and one for my loose powder. This brush performs aces in all three of those specs. So why am I on about this brush today? Well, Urban Decay has all their Good Karma line on deep discount on their website.

I can only assume that UD plans to discontinue these brushes in favor of their UD Pro line which has many of the same types of brushes, including the Optical Blurring Brush. But since they may be somewhat similar I’d say take advantage of the sale prices and go with the Good Karma ones for now because they are superb.

I rounded out my collection with a few more styles and I love every last one of them. Amazing what having a good weapon in your arsenal can do for makeup application. Even the lackluster drugstore palette I picked up recently applies better with these brushes. I know there are a myriad of great brushes out there but UD Good Karma Brushes are my pick for best in slot. 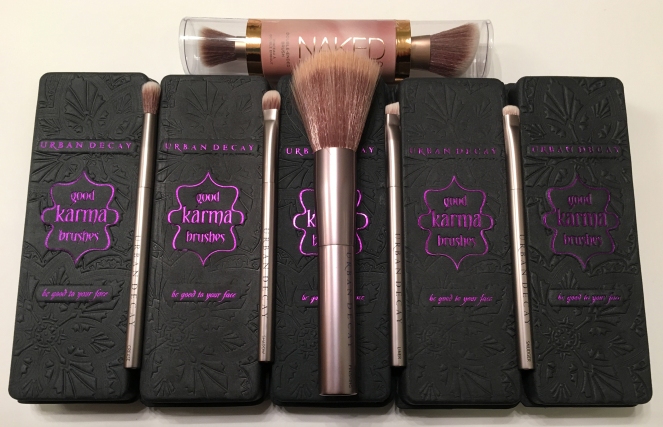 As most already know, Beauty.com and Drugstore.com are being shuttered by Walgreens at the end of September. I took advantage of the generous friends and family coupon last week and bought a few goodies.

Urban Decay Eyeshadow Primer Potion. Yeah, I guess I’ve been living under a rock and I’ve never tried this product. I just picked up the travel size to see if I liked it. I’m partial to Kat Von D’s High Voltage Eye Primer but it has a yellowish cast to it that doesn’t work well under some colors of eyeshadow. First impression of UD’s Primer Potion, it is definitely worth the hype. I liked the slippy application which really let me get it all over my eyelid before it set. It also doesn’t have a weird tint to it so colors look more true. As for wear, I still like KVD’s primer better as it has a longer wear time but UD was no slouch either. At any rate, it’s a great product and I can see myself getting the full size once this runs down.

tarte Amazonian Clay Full Coverage Airbrush Foundation in Light Neutral. Ok, so I’ve reallllly wanted to try this foundation for a while and I figured now was the time. Unfortunately there were not that many color options left on Beauty when I went to go buy so I took a chance and went with Light Neutral. And, it’s a bit too dark but I think I can make it work. I am not sold on the packaging. It’s loose powder in a sifter jar but the problem comes from the weird concave lid which doesn’t let you really swirl the powder onto your brush. I ended up grabbing a little dish to swirl on and that worked fine but was more fiddly than I like. As for the foundation itself, it’s super buildable and offers some great coverage. I’ll need to play with it a bit more and I’ll come back with a report.

Evologie Stay Clear Cleanser. Evologie was a brand I had never heard of until I received a sample of their Intensive Blemish Serum in a Birchbox. I totally fell in love with it so I’ve been wanting to try their other products. I can only give the barest of first impressions as I’ve only used it once. I liked the size of the product, you don’t really need much to get a full lather on. I used it with my Foreo Luna and my skin felt super clean afterwards though a bit on the dry and tight side. Luckily, my skin wasn’t irritated at all. I’m interested to see if combined with the blemish serum if it will help tame my occasional but super irritating chin breakouts.

RAMY Tweezers & Grooming Scissors by Tweezerman. Full disclosure, I have no idea who RAMY is or why he’s designing scissors and tweezers. But, he did a great job. I’ve been using the same dinky little tweezers for ages and they were mostly fine. But I wanted something MOAR. These tweezers managed to grab even the tiniest stupid hairs and hang on to them to pull them out cleanly. Definitely worth the splurge. I bought the scissors to use on my dog because they are wee and have rounded tips. Little grooming scissors are the easiest way to trim away the annoying little hairs that grow like mad around his eyes.

IT Cosmetics Naturally Pretty Vol. 2 The Romantics! Palette. That name’s a mouthful. I’m such a sucker for eyeshadow palettes. They get me every damn time and I can not resist. It’s like a sickness. I picked up this palette even though it has tocopheryl acetate in it and if you read my screed on vitamin E you know I’m usually allergic to it. But, I was gifted an IT palette a while back that had very similar ingredients and never had an issue with it so I decided to roll the dice. So far, no irritation! Hooray! I’m into pastels right now so this palette was right up my alley. With the exception of some of the darker colors, the light colors are super sheer and need to be built up or applied wet to really get some color payoff. A primer is an absolute must unless you want the faintest of color wash. This palette has a soft velvety case that I’m sure will be dirty in no time flat but it sure is fun to pet and call my precious. I’d do some swatches but honestly I’d do a crap job and there are already excellent swatch pics floating around for your swatch viewing pleasure.

Last up, Invisibobble Original: The Traceless Hair Ring. Sounds like a D movie title. I wear my hair up almost exclusively when I’m at home because I live in the desert and am always hot. I, however, hate the funky crease I get in my hair whenever I take it down. So this thing, it still creases my hair. But, on the upside, it’s super comfortable to wear. I haven’t had a hair headache since using it. I’ve also found that my hair stays put far better than with a traditional elastic band so that’s a nice bonus.

I would be remiss if I didn’t mention that my order came in four separate boxes, one of which only contained one solitary sad little sample packet. The wastefulness made me cringe but at least the box can be recycled. I also didn’t get the order in 1-3 days either but oh well.